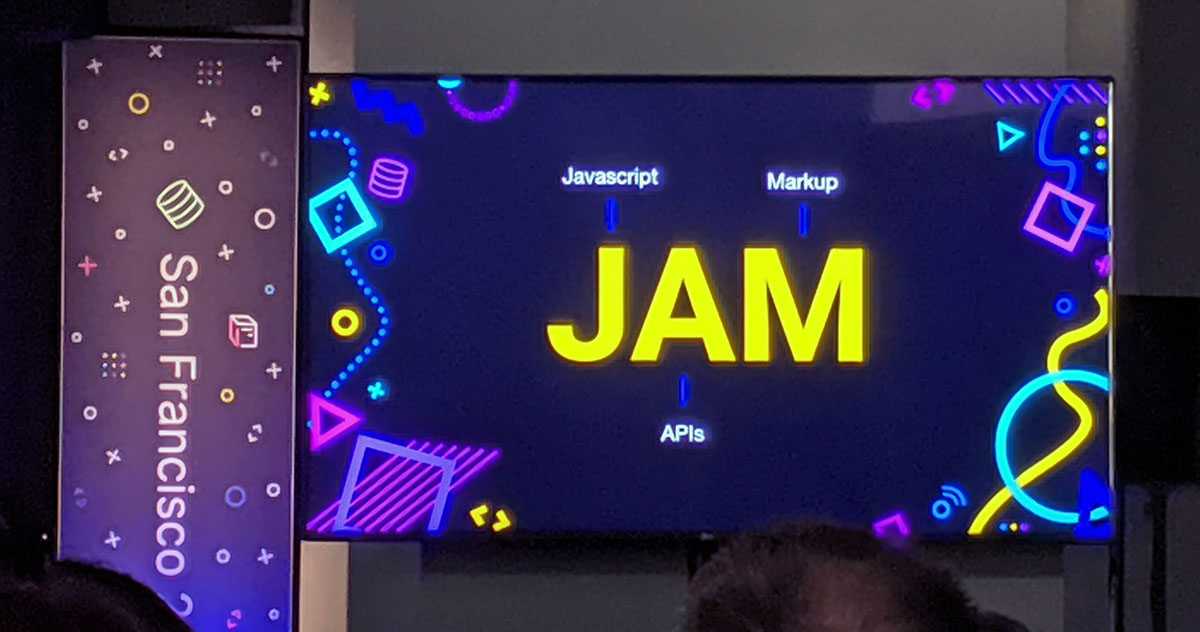 This past week, I had the joy of attending the JAMStackConf in San Francisco with 550 other excited and curious developers. For those not familiar, yet, with the JAMStack, it stands for Javascript APIs Markup.

It's an approach to developing applications that result in highly performant static sites that consume APIs for dynamic content.

Lest you be dissuaded by the term static, this refers to what the browser receives not to how interactive a web application can be. In fact, Static Site Generators (SSG), like Gatsby, could be considered replacements for framework boilerplates like create-react-app. Not to start an argument there, there are plenty of resources online to familiarize yourself with the JAMStack, if you are so inclined.

For now, I want to offer a few reflections on my experience at the conference and the state of the JAMStack that I gathered from participating.

Some of the biggest hurdles for developers interested in developing on the JAMStack involve OAuth, Live Edits, Live Preview, CMS Solutions that are non-developer friendly and trusted, and handling builds of Large Sites, handling builds with a large volume of content production 24 hours of the day. Several of these questions received answers this week:

These are just a few of the tools we heard about and were able to talk about later with vendors.

Besides showcases like those on Gatsby's site, it's great to hear from major corporations and major agencies finding the JAMStack to be a solution for many of the problems they have faced with quick turnarounds, organizing development workflows and teams, and providing high-quality performance at scale.

Justin Watts from Loblaw Digital shared with us how they were able to redirect a corporate culture towards greater efficiency while producing major sites used by millions of Canadians.

Two of the more broadly well-known viral social movements of the past two years—The Kaepernick Nike Campaign and The Chicken Sandwich Wars of 2019—had behind them JAMStack solutions that were able to handle hundreds of thousands of users at a time.

At the Restaurant Brands International booth I heard it said (in so many words):

The chicken may have run out, but the website surely didn't

Netlify Function, Serverless Functions, etc., are a necessary tool to master to take full advantage of the JAMStack.

I was fortunate to be able to attend the Serverless Workshop led by David Wells. Check out his stuff wherever you can find it (like here on Github).

The key to creating dynamic JAMStack applications is mastering the middle-letter of the JAM—APIs. I feel very empowered by what I learned from David. His workshop was deep where needed and broad where needed. I left with a million use-cases buzzing around my brain.

Is there a traffic JAM ahead? While it seems there is a growing number of devs who love the JAMStack, I talked to very few who had the opportunity to work on it day-to-day in their current position or who thought it's unlikely they ever could at their current job.

If this paragraph is all you read, this is the most important takeaway I had from the conference. I am confident in the direction of the JAMStack, the progression of the development and release of dev tooling, the quality and ease of use of the development, build and deployment process, but, but, but, and perhaps this is always the case with new tech (legacy code), I along with many other developers have little chance to use the stack without changing jobs, going freelance, or building stuff on the side.

Could this create a ceiling for the JAMStack?

I, for one, intend on using it in all my side-work. But, honestly, I have a wife and three kids. I can't be coding 10-12 hours a day. I need my coding passions to line up with my employment or fughetaboudit!

That is some sweet tasting JAM

I said the previous paragraph was the most important, it is, for the sakes of my thoughts on the stack, but this is my favorite. I really enjoyed getting to know other developers at this conference.

Finally, I want to share a story with you about Sean Grove from OneGraph.

When I sat next to Sean over lunch, I had no idea who he was at the time. We were all wowed by his presentation not one hour later. Over lunch, he was very cordial, friendly, and engaging with everyone around the table. He didn't talk about himself, but asked us questions about who we were and what we did. So humble. That day we were served Cornish hens (with plastic forks....) and behold, my fork busted in half. Before I could do anything, without a word, Sean went and grabbed me new silverware. Then he chatted with me a bit as lunch was ending.

We not only need great technology to change the world, we need great people. Here is a founder of a new startup, being humble and through that showing great strength. I think we need more people like Sean and should ourselves try to emulate that type of servant leadership. Match it with some serious public speaking chops and you have someone people will follow.

This is also a proxy for what coding is all about.

Anthropologists have long recognized that technology is simply an extension of humankind. The JAMStack, or whatever stack, company, job, or whatever, tech is always about people. What we produce is intended to help others in some way, shape, form, or fashion.

I've been encouraged this past week to remember people when I code. People I love, people I work with, people I meet, and really all people. We never know how far some piece of code we craft will go, nor how many others it will touch.

That's humbling and yet exciting to think about, isn't it?

Written by Wesley L. Handy who lives and works in Virginia Beach, VA, finding ways to build cool stuff in Gatsby and React. You should follow him on Twitter

All Posts
Cleaning Up Wordpress: Lessons Learned in Website Security